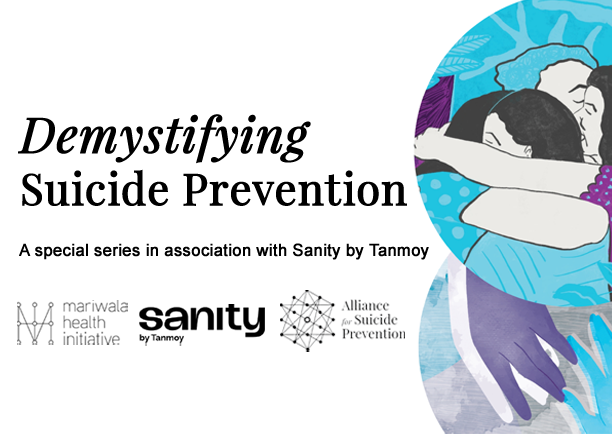 A special series in association with Sanity by Tanmoy dedicated to suicide prevention, which will bust myths about suicide; and ultimately, create space for reflection, action, and hope.

Every year, more than 800,000 people die by suicide across the world, and India accounts for around 17 per cent of these deaths. Suicide is the leading cause of death of youths aged 15-29 years. Suicide is a global public health problem, but more than 3/4th of these deaths occurred in low and middle income countries.World leaders agreed to decrease suicide deaths by one-third by 2030, and included suicide rate as an indicator under SDG 3, yet, there is very little conversation in the private or public sectors on this topic. One reason for the absence of a national level public discourse on suicidecrisis is due to the poor understanding of the issue at hand. At Mariwala Health Initiative, we are committed to changing the conversation around mental health in India, and suicide prevention is a key part of this effort.

To further the conversation around suicide & its prevention, we're partnering with Sanity by Tanmoy to discuss effective and holistic approaches to view and understand suicide prevention strategies and programs. Tanmoy Goswami, founder of SanitybyTanmoy has lived experience of battling suicidal thoughts and has written profoundly about his experience. Tanmoy’s thoughtful writing covers wide-ranging aspects of mental health, not only to inform the reader about the topic but also to provoke us to think beyond popular themes of mental health.

We believe this collaboration will enhance the cause and give us an opportunity to reflect on the issue of suicide through a psychosocial lens and initiate important discussions. You can now read all current and upcoming articles under this partnership at this link. Stay tuned to see more in this space!