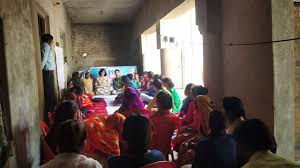 WAYVE Foundation was founded by Manjula Pradeep, a human rights activist and lawyer, and S.H. Raihan in 2018 with the mission and vision to address discrimination and violence based on caste, class, gender, religion, ethnicity, disability, and sexual orientation. The Foundation builds the capacity of young leaders from marginalized backgrounds, and addresses their mental health needs rooted in the structural and interpersonal discrimination and violence they have faced—so that these leaders may in turn work with their communities to promote advocacy and healing. WAYVE Foundation also works to strengthen networks of women–led and youth-led community-based organizations working with marginalized groups across India, and build their overall capacities.

The historical and continued violence of the caste system has led to continuous and intergenerational trauma among Dalit communities, who comprise about 16 crore of the Indian population. Such violence—including sexual violence and murder of Dalit people—not only impacts the individual, their family, or their immediate communities, but often prompts fear and anxiety among Dalit communities of further attacks, discrimination and threat to their lives, so much so that mass internal displacement of Dalit people from the site of the attack in the aftermath of such violence have been reported. Young people from Dalit communities inherit feelings of inferiority, lack of hope towards a better future, and anxiety. Even today, young persons who identify as Dalit, are reluctant to reveal their identity in unfamiliar settings due to fear of discrimination, etc. Similar discrimination and violence against marginalized ethnicities and religions, such as Adivasi communities and Muslim communities are also prevalent.

Similarly, intersections with Dalit, Adivasi, and Muslim identities, such as gender, further highlights the extent and nature of the violence confronted. In 2006, a study titled ‘Dalit Women Speak Out” (covering Bihar, Uttar Pradesh, Tamil Nadu and Andhra Pradesh) studied 500 cases of violence against Dalit women. The findings of this study showed that more frequent forms of violence perpetrated against the majority of Dalit women are verbal abuse (62.4% of total women), physical assault (54.8%), sexual harassment and assault (46.8%), domestic violence (43.0%) and rape (23.2%), in descending order. The deeper reality is that the mental health issues faced by Dalit women survivors of such severe forms of violence are often not taken seriously by their communities, nor by the legal and social system, on account of their multiple marginalizations and life at the intersection of both patriarchal and caste-based oppression. Mental health problems of Dalit women and girls are not recognized as an important need, hence there are no proper mechanisms set up to address mental health and support survivors. There are few effective mechanisms by the system, or by communities, to support the healing of these women survivors, and promote their ability to defend themselves in accessing justice.

MHI partners with WAYVE Foundation to support a year-long training program for 30-35 young women grassroots leaders from Dalit, Adivasi, and Muslim communities in the states of Bihar, Uttar Pradesh, Gujarat, and Chhattisgarh. This training covers fundamental and constitutional rights, rights related to social protection, education, economic and political participation, mental health, and counselling skills. Each leader will be mentored by the WAYVE team to address their own distress as they navigate supporting the rest of their communities in fighting discrimination, violence, and bringing mental health to the forefront. At the end of this program, many leaders aspire to set up their own community-based organizations working on accessing justice and healing for marginalized communities, and others hope to fortify their skills and harness the power of peer support at a personal and professional level through this training.