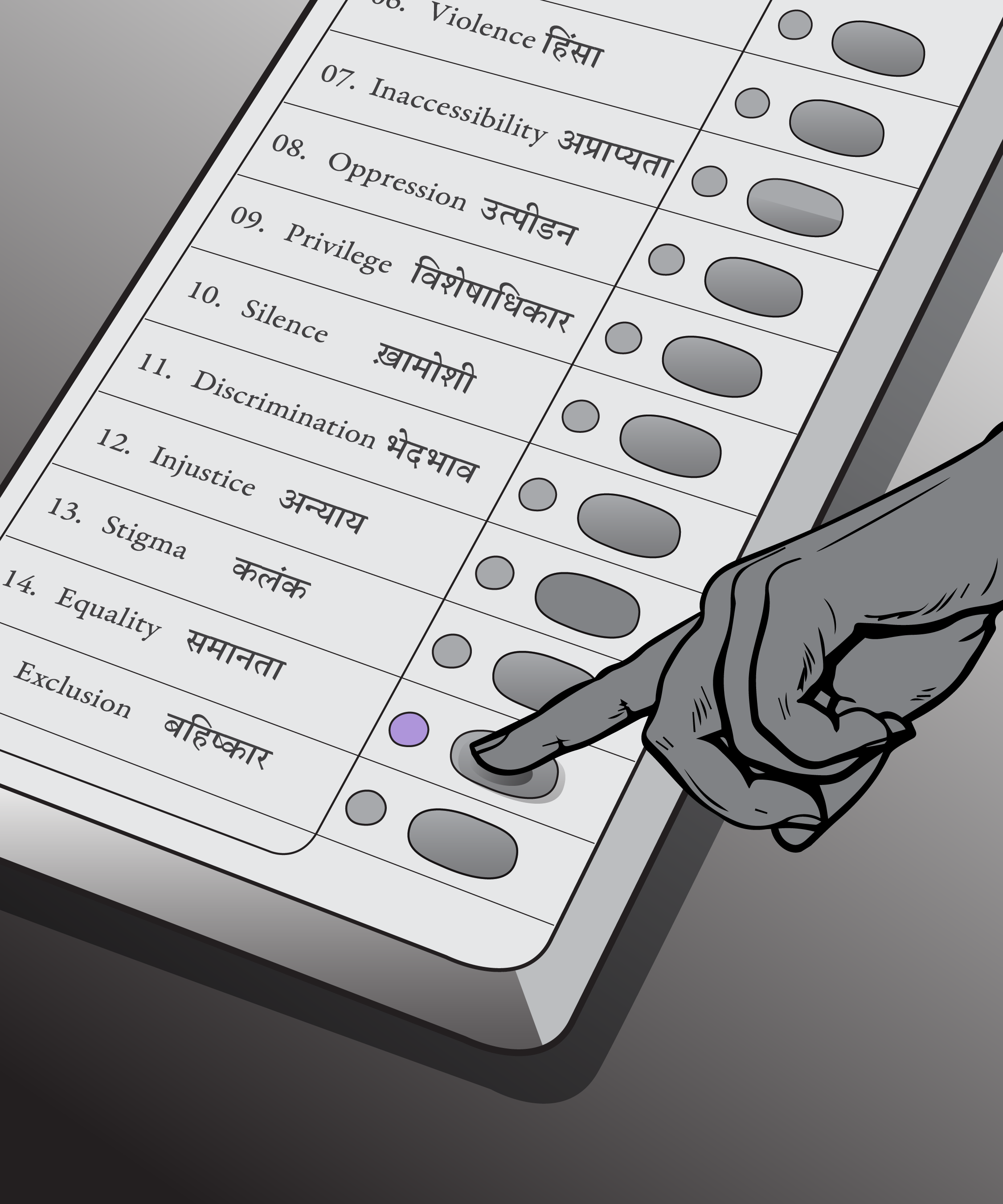 Adrika Sengupta is Head of Programmes at Anjali, a rights-based mental health organization in Kolkata, West Bengal. She has a Master’s degree in Mental Health from the Tata Institute of Social Sciences, Mumbai, and in...
Project

Does every Citizen have the Right to Vote?

On voting as an issue of development, social justice, and human rights—an instrument by which we are able to counter incapacitating narratives and to make visible an ever-disenfranchised population.

Accessibility for persons with psychosocial disabilities

Exercising Rights of a Citizen

“Of course I know which political party I want to vote for; do you think I’m not updated?” exclaimed one of the group, when Anjali’s team visited residents in a mental health institution to conduct an orientation on political parties and the current political scenario. The excitement in the usually dingy room was palpable as 64 eager faces glistened with hope. The conversations on voting itself had been fairly simple. We are often asked how we decide who gets to vote. We asked residents in hospitals whether they were keen to vote. Some were, some weren’t. We left it at that.

Voting has been, for Anjali, an issue of  development, social justice, and human rights, as well as a feminist issue. It is an instrument by which we are able to counter so many incapacitating narratives – stigma, lack of access to knowledge and mental health care, social exclusion – and to make visible an ever-disenfranchised population. Before setting out, we had often asked ourselves why we were so keen on this program – what would our residents achieve, and how tangibly would their lives improve? Were we striving for liberty, for agency? What might these terms even mean to people who know that after they cast their votes they would be bundled off to their hospitals again? For what would they be voting? What were their hopes? There were never any singular answers. We could only reiterate our conviction that this could eventually open up a whole realm of possibilities in the lives of people with psychosocial disabilities locked away in mental health institutions. And so we knew we had to keep going.

Lamichhane (2014) reinforces what we have long known – that not only does mental health care have precious few resources allocated to it, most of these resources are used to treat people medically. Lamichhane says that in working with people with psychosocial disabilities we must follow the lead of rights-based organizations that strive for civil, legal, and social rights. In this context, we realized our vision would not be served by getting the residents voters’ cards that openly stated where they lived. Following lengthy negotiations with relevant law enforcement entities, and the Election Commission, we won through: the voter identity cards had photos, names and addresses – but no mention of any mental hospital. The individuals concerned would not have to carry that burden with them for the rest of their lives. For Anjali, this was a crucial step towards fulfilling its vision of destigmatization and deinstitutionalization.

The Representation of the People Act, 1950, says under Section 16 (b) that a person “of unsound mind and [who] stands so declared by a competent court” may be disqualified as a voter. But what of the hundreds of recovered individuals who, having been abandoned to live out their lives in institutions, must bear the brunt of such exclusionary laws? Pollock and Mulla (2013) have said that past treatment for mental illness is only prima facie evidence, and nobody may be barred from voting on that basis. The right to vote (and to be elected) in genuine, periodic elections is intrinsically linked to a number of other human rights, the enjoyment of which is crucial to a meaningful electoral process. These rights include the right to freedom from discrimination, the right to freedom of opinion and expression, and the right to freedom of movement.

Many aspects of social exclusion require us to pay attention to structural oppression in society, and to broader policy initiatives. Psychiatrists have a role to play in highlighting the links between policy, institutionalization, and psychosocial disabilities. Inclusion is pertinent to the experience of users / survivors, and must be treated as non-negotiable in a rights-based mental health system. Being part of the electorate is perhaps the most conventionally significant way of being acknowledged as a citizen, whose interests the State must not disregard.

During our conversations about the impending elections, one resident said, “I am a citizen of this country but have no certificate to prove it. Isn’t it my basic right?” Another person added,  “Just because I suffered from mental illness at some point, it doesn’t make me any less human or any less of a citizen of India!” It was during this time that we completely rejected the suggestion made by many – hospital authorities, doctors,  even government departments – that voting booths be made available inside the hospitals, for the convenience of the residents. To us, this represented a pitiful and disgraceful method of continuing with the invisibility and othering of people who live in institutions – of perpetuating the sense of being locked away from society. We also had conversations about CRPF jawans being present in the voting booths, which we realized could  cause agitation, and rake up frightening memories. What if these policemen rounded them up again and took them to some other mental institution? What if they had to go away to a place where there was no Anjali? These were some of the musings of the dispossessed individuals with whom we spoke.

On the day of the elections, in the scorching heat, under the debilitating influence of psychiatric medicines, amidst faulty electronic voting machines that took three hours to fix, through the sardonic murmurings of the police officers – “maybe these people pressed the buttons so hard that the machines malfunctioned” – the residents held their own. They waited patiently, knowing that lunch time was probably over by now in the hospital. They resisted the suggestion that they be given preferential treatment and be allowed to form a separate line so that they could be done faster: “No, we will wait our turn, we’ll stand with the rest of the public.”

There were moments throughout, as we went along, that made us feel that somehow this process had helped achieve some semblance of equity. Yet, even as we helped a frail old polio-stricken woman up some steps, lamenting the State’s lack of concern for accessibility, we realized that the road to equity was going to be a long one. We also understood that it wasn’t us who were determining the process and its outcome. The residents had been facilitating these in their own way, all along. But our sense of truly being a rights-based organization that works for social inclusion with excluded persons was certainly reaffirmed.