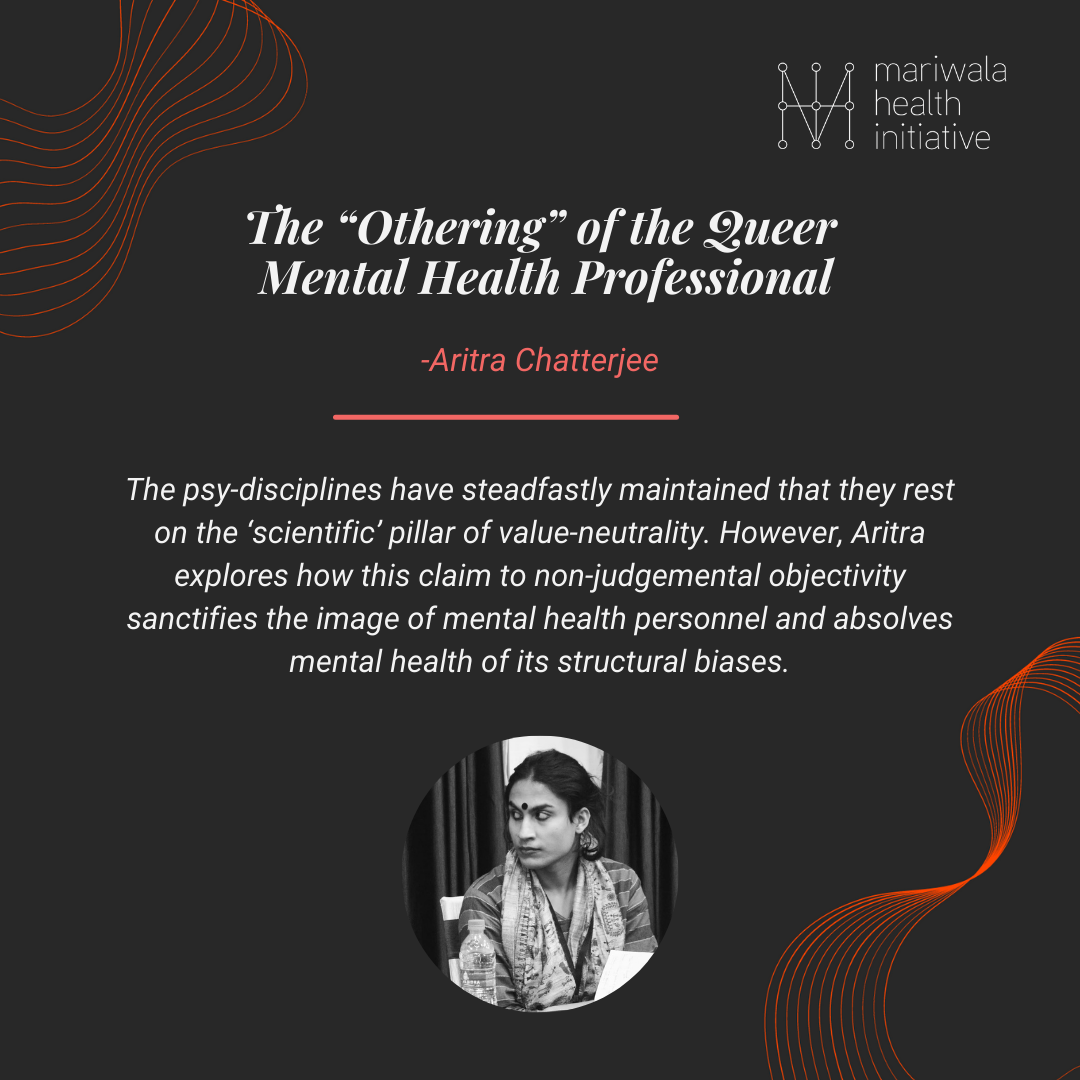 Aritra Chatterjee (preferred pronouns: she/they) is an MPhil trainee of Clinical Psychology at University of Calcutta. Their primary area of research interest lies in the area of LGBTQHIA+ mental healthcare with a soc...
Lived Experiences

The “Othering” of the Queer Mental Health Professional

This article attempts to encapsulate the plight of mental health providers/trainees who come from marginal gender/sexuality locations, and their experiences with workplace and organizational environments. While carrying out these observations, it is important to remember the potential costs of disclosure of the gender-sexual minority identities of the individuals concerned, given the oppressive history of mental health institutions in routinely pathologizing these identities.

In addressing structural inequities in mental healthcare, what most readily comes to mind is their likely impact on the service users/recipients of care. The way in which such inequities get played out in the organizational climates of mental health workplaces and educational institutions seldom engages our attention. Mental healthcare ecologies seem to be complicit in perpetuating the notion of a barrier-free utopia when it comes to workplace and institutional environments, drawing on grand professional virtues such as value-neutrality, a non-judgmental outlook, inclusivity, and diversity. By extension, these popular assumptions sanctify the image of mental health personnel, absolving it of structural biases – and, as a natural corollary, their interactions with colleagues and supporting staff are assumed to be similarly flawless. Quite often, however, another picture emerges when we listen to the margins.

The author would like to evoke a historical moment of disclosure in the history of the mental health workplace. Before homosexuality was voted out of the Diagnostic and Statistical Manual of Mental Disorders by the APA’s Board of Trustees in 1973, gay rights activists Frank Kameny and Barbara Grittings held a panel at a Dallas convention of the APA with John Fryer, a gay psychiatrist appearing under the pseudonym of Dr H Anonymous. Fryer felt obliged to disguise his identity, given the realistic fear of adverse professional consequences. He made a masked appearance in a wig, declaring with sheer grit over a voice-changing microphone: ‘I am a homosexual. I am a psychiatrist.’ Fryer disclosed that 200 other gay psychiatrists were present at the convention, and also revealed the existence of a gay psychiatrist association. This subversive moment in history tore down the assumed cis-heterosexual location of the mental health professional, and blurred the divide between the “curer” and the “to-be-cured”. As Grittings later recounted:  ‘It opened up things a great deal, because it made many psychiatrists realize gays were not some abstract idea, but were in fact [present] in their profession.’ In retrospect, it is necessary to note that Fryer was subsequently terminated from psychiatric residency at the School of Medicine, University of Pennsylvania.

sampling experiences from the Indian context

In a quantitative study that focused on unpacking attitudes towards homosexuality among psychiatrists of India, it was observed that most psychiatrists (83.5%) were comfortable referring their clients to a homosexual colleague. Even so, some still had reservations about exposing children to homosexual professionals.

Kottai narrates his experiences of ‘exclusion’ and ‘everyday terror’ as a clinical psychology trainee in Tezpur, Assam, where his gender/sexuality became a point of contention and ridicule amongst the institutional fraternity:

‘There was immense scrutiny and control on the way I talked, dressed, emoted and behaved in the mental health institution....A senior psychiatry student eager to probe my sexual preferences constantly quizzed me on the hostel’s public spaces, blatantly violating my fundamental right to privacy. The academic space was [so] bruising and intimidating that even the junior students used to mock me by [mimicking] my tone of voice and speech.’

Prasad shares their experience as a queer individual in India learning about LGBTQIA+  issues within a psychology classroom, where information about extremely private aspects of queer sexuality was disseminated without regard to whether the receivers had the sensitivity to be given these graphic, albeit factual, details:

‘...the next hour was only about the different roles that queer people play in the bedroom, with specific descriptions of their acts.’

structural and environmental barriers in organizations

According to a study that focused on LGBT healthcare trainees’ and professionals’ perspectives on academic careers in a Western context, some of the prominent barriers were: a) institutionalized bias against LGBT scholarship, often coupled with uncertainties around promotion due to such academic engagements; b) lack of access to adequate mentorship and networking opportunities; and c) hostile climates within institutions. The study included social workers and behavioural counsellors under the rubric of healthcare trainees/professionals, and is therefore quite significant in our present context. 12 LGBT-identified trainee counsellors were interviewed about the everyday slights and insults they encountered in their programmes on an everyday basis. Participants, who were particularly upset to encounter such behaviour within a setting committed to well-being, had a sense of professional disillusionment, which was further compounded by the lack of adequate faculty intervention.

With reference to the training ecology of mental health professionals, a queer therapist based in India observes that cis-heteronormative bias cuts across such ecologies universally –  they claim that while professionals are urged to be open-minded and sensitive towards gender and sexual minorities, sensitivity training and in-depth learning about gender-sexuality are missing.

Voices of dissent become submerged in mainstream Psy discourses as a result of power asymmetries. In fact, the Indian Psychiatric Society and the Indian Association of Clinical Psychologists practiced silence on LGBTQIA+ issues until the active involvement of courts. The IPS position statement on homosexuality as being a natural variant of human sexuality came only in 2018, in the same year that the country’s apex court decriminalized consensual same-sex relationships, although de-pathologization of homosexuality had long been a matter of clinical consensus. It was only in 2020 that the IPS and IACP spoke up about the harmful effects of conversion therapies on gender and sexual minorities, following a rights-based furore over the death by suicide of 21-year-old Anjana Harish, who had been forcibly institutionalized by her family for “conversion treatment” for her bisexuality.

drawing the strings together

It is interesting to note how, in an article outlining the role of the psychiatrist with respect to the lesbian, gay, bisexual and transgender population of India, the psychiatrist’s “being” is constructed, throughout, as exclusive of LGBT+ status.

As far as the author is aware, none of the professional bodies in the arena of Indian mental health is explicitly vocal about the possible intersection between GSM (gender and sexual minorities) status and mental health professional identity, thereby invisibilizing and completely erasing a range of significant voices from the discourse.

Given the timeline of developments in queer mental health in India, and the perennial bracketing of the queer person solely as a potential client, it seems implausible at the moment that mainstream Psy discourse in India will warm up to acknowledging the contribution of the lived experiences of queer mental health professionals, or work towards building safe workspaces for them. The journey ahead seems long and tedious, with resilience and self-affirmation as the chief coping tools for professional survival. Networking among queer-identified professionals/trainees could aid in the amplification of their voices so as to create ripples within dominant Psy discourses through brave advocacy.

‘My silences had not protected me. Your silence will not protect you.’ – Audre Lorde

(3) Reddy, Srikanth. “Attitudes towards Homosexuality among Psychiatrists in India: a Survey-Based Cross-Sectional Study.” Archives of Psychiatry and Psychotherapy 3, 2016, pp. 32–39.

(5)  Prasad, Deepshikha.“TFW Your Professor is Inside Your Bedroom.” LiveWire,  23 Nov. 2020,   https://livewire.thewire.in/gender-and-sexuality/tfw-your-professor-is-inside-your-bedroom/.  Accessed 24 May 2021.

“..while professionals are urged to be open-minded and sensitive towards gender and sexual minorities, sensitivity training and in-depth learning about gender-sexuality are missing.”