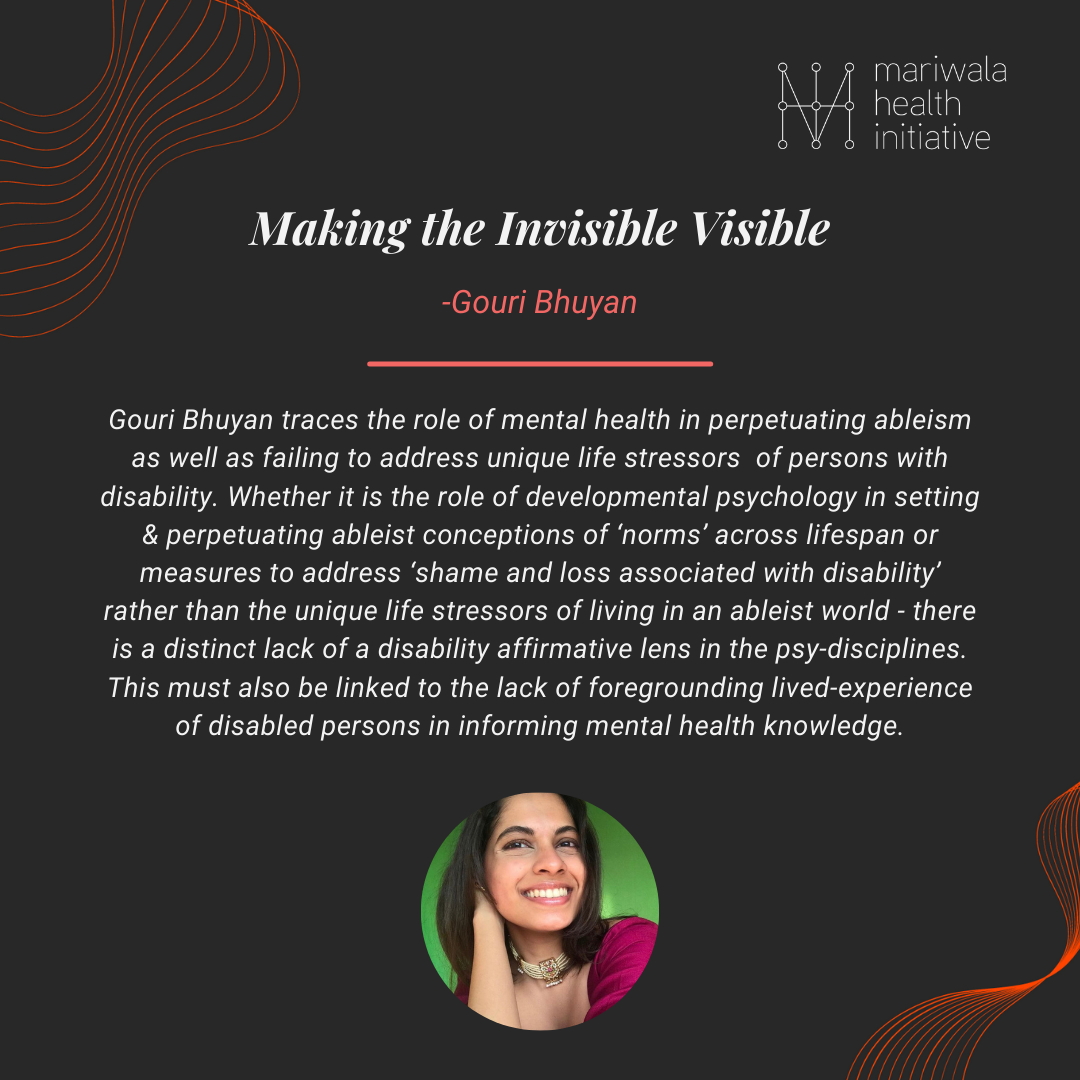 Gouri Bhuyan is a postgraduate in Psychology from the University of Mumbai, Department of Applied Psychology. She identifies as an Ambedkarite feminist with a disability (low vision), and advocates for the rights of w...
Human Rights

The disabled constitute the largest minority in the world. Given the stigma surrounding disability, how do we look at mental healthcare for PWD?

disability is a social issue, not a physical one

What do we mean by this statement? To begin with, that the predominant narratives of “normalcy” are hegemonically sculpted by the powerful majoritarian groups: upper-middle class; cis-het; able-bodied; neurotypical; and, in the Indian context, Brahmin men. The unidimensional narratives that thus emerge make anything deviating from the dominant sound wrong or abnormal. Not only are such constructions myopic, they put the onus of this “abnormality” on those being excluded, rather than on the systems that exclude them. (If spectacles had not been invented, an enormous section of the world’s population would be visually disabled. However, as the socially powerful also need spectacles, visual disability becomes “normal”.)

Distinguishing between physical impairment and disability, one scholar asserts that while the former refers to certain embodied limitations, the latter is the consequence of a society  devaluing and disempowering those in the former situation, and categorizing their physical states as abnormal.
It becomes important, then, to consider how these ableist narratives of abnormality construct the disabled experience. Besides the more obvious forms of discrimination it perpetuates, an insidious side to ableism is its internalization by persons with disability (PWD).

Internalized ableism could manifest as lowered self-esteem with regard to one’s abilities, and body image issues – or shame about one’s body. It might also lend itself to overcompensation of sorts, seen in an extreme perfectionism at tasks, and an aversion to help-seeking behaviour, so as to seem worthy of being treated as an equal. Expressing their sexuality is also, often, a particular struggle.

Most forms of discrimination can be traced back to the buttressing of an existing status quo by those in the top echelons of any hierarchy. In the Indian context, religion is often used to legitimize the abnormality-driven concept of disability. The idea that the nature and severity of someone’s disability correlates to the karma from their past life, for instance, is used to guilt PWD into acquiescing in the apparent pitifulness of their situation. Once PWD succumb to the belief that they are deserving of their adversities, they are less likely to try to change anything: this keeps them “in their place”; robs them of their ability to build resilience; and also keeps those in power exactly where they are.

The lived experiences of marginalization keep PWD so caught up with the difficulties of functioning in the world as it is structured, that their mental health often takes a backseat. Traversing through life always seeking to belong can leave a person with very little scope or opportunity for meeting other needs. 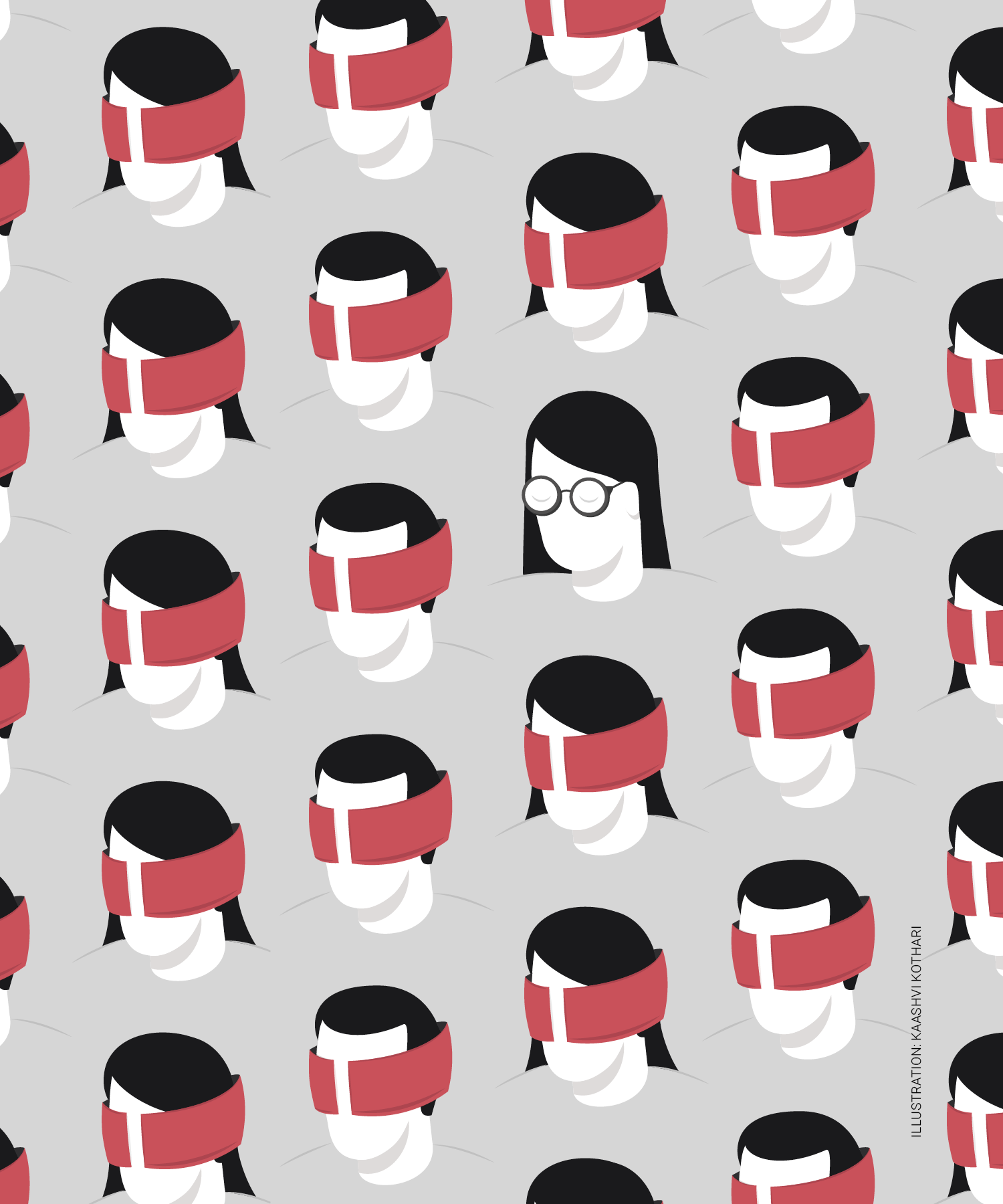 PWD: why the gap in mental healthcare?

While abnormality-focused literature, and lack of access, are the prominent players here, psychology has also played an inadvertent part in the negative view of disability. Developmental psychology is largely responsible for setting, and measuring, norms across the lifespan, thus creating and perpetuating ideas of “abnormality” – which work against PWD. The very division of development into fixed stages is based on an ableist timeline. For instance, an able-bodied 16-year-old in India is expected to have completed school, but admission into school may have been delayed for a PWD, for reasons of stigma or otherwise.

Psychological research in the area of disability has focused primarily on the ill effects of the shame and loss associated with the “tragedy” of being disabled – rather than on the systems that perpetuate ableism. “Quality of life” research rarely puts aside its ableist conceptions in order to understand how PWDs construct their own narratives in this regard.

The lack of representation of PWD in the social mainstream stems from being invisibilized, and  seen as inconsequential in the spaces they do occupy. This results in the mainstream having limited exposure to the lived experiences of PWD. Interactions between the able-bodied and PWD, when they do occur, tend to evoke stereotypical responses in the former: pity; discomfort, even fear; or sentimentally finding PWD who manage everyday tasks or display certain talents "inspirational" because expectations of them are so low.

Pity and sympathy are all too common; discomfort or fear often stem from a lack of awareness or exposure – one fears what one does not know – and another’s disability is often an uncomfortable  reminder of one’s own frailty or mortality. Fear also becomes pejorative towards its object; able-bodied individuals commonly have low expectations of what PWD can achieve. Such stereotypes often colour the way able-bodied individuals, including therapists, perceive PWD, and make it that much more challenging for PWD to create positive and robust identities for themselves.

A majority of the disabled community resides in rural India. Most have no access to fundamental human rights like education, equality, a life of dignity and respect, among others. Ableism often denies access to school and higher education, while more inclusive systems of education that follow recommended universal design are still under-funded. The ill-equipped infrastructure of these schools prevents the integration of students with disability, alienating both students with and without disability from the experience of interacting with and understanding one another.

It is necessary for MHPs to rethink their gaze. Unlike the moral or medical models for viewing disability, it is the oppression model that can help unpack the disability experience. Such a model would be based on the assumption that the mental health of PWD is most likely linked to the oppression and stigma they experience. The focus here would be on socio-political factors, with an acknowledgement of the internalized ableism within therapy rooms.

Therapists need to acquaint themselves with the lived experiences of PWD. For instance, when it comes to the families of PWD, the person with disability is usually in a minority of one. Unlike with gender, race, sex, caste, and other such markers, where usually at least one parent belongs to the same minority group, the individual with disability is often the only such person in their family. So they may not have anyone else to look to, and may well feel alienated even within the family. MHPs, then, need to understand the larger psycho-social and socio-political contexts that intersect to culminate in the gap under consideration here; as well as gain familiarity with the variance in disabilities, across spectrums – including, for instance, the differences between the lived experiences of those with congenital and acquired disability.

Mental healthcare settings, too, can be made more accessible for PWD by following the recommendations provided in the extensive literature on universal design.

Moreover, the acute under-representation of the disability community in psychological research, both as participants and researchers, results in ableist and exclusionary psychological interventions and tools. It is important for younger PWD to see themselves represented not only in the material they read, but also among the professionals with whom they interact. Modelling allows for the construction of possibilities: if an adolescent with disability never sees themselves represented a certain way, the default assumption is that it is not possible for them.

The field of mental healthcare must open its doors to employing more PWD as mental healthcare workers. This would be the best way to set an example, and lead with the inclusivity that the arena often claims to champion.

“The idea that the nature and severity of someone’s disability correlates to the karma from their past life, for instance, is used to guilt PWD into acquiescing in the apparent pitifulness of their situation.”