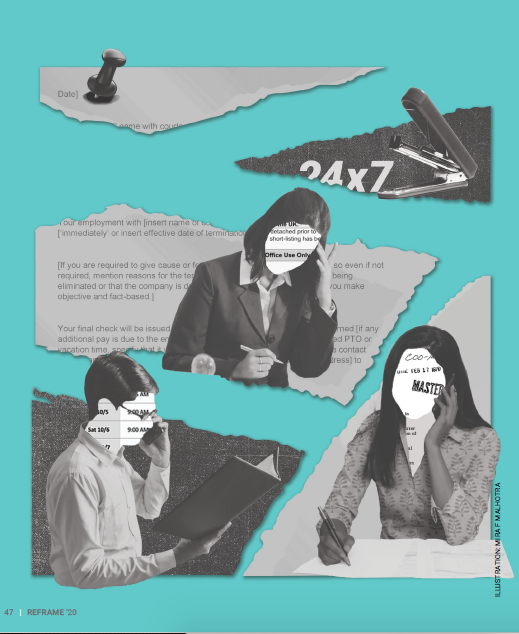 Lorelle Mariel Murzello completed an MA in Social Work in Mental Health from TISS, Mumbai, in 2017, and has been working in the education space ever since. Her research interests include mental health, culture, and ge...
Research, Lived Experiences

Experiences of toxic work cultures and the process of recovery

Wellbeing at the workplace: background to a study

The World Health Organization (WHO) defines health as ‘not merely the absence of disease’. While the diagnostic categorization of mental illness has helped understand illness conditions and effective treatment, it has failed to encapsulate the essence of mental health beyond these categories – that, for instance, it is a spectrum, on which we might move up and down, multiple times in our lives.(1) It is important to note that both, the social model of disability and the wellbeing perspective, view “dysfunction” as inhering not within the individual but in the environment. Recovery, then, is not “recovery from” the debilitating/distressing condition but, rather, a non-linear process that looks beyond the “clinical” as it seeks to understand people’s hopes, dreams, possibilities, and potential.(2,3)

It was with this latter framework of wellbeing in mind that I set out to understand people’s experiences of “toxic workplaces”. The 10 participants of my qualitative study, in the age bracket of 24-32 years, narrated their work trajectories as interns and/or full-time employees in educational institutions or in the social or corporate sectors, in Mumbai, Vadodara, Gurugram, and Delhi.

Recognizing toxicity in the workplace

Sociologists and anthropologists have moved beyond geography to define culture. The culture of the workplace may include everything from its physical space to its work ethic, communication patterns, hierarchical structures, and written and unwritten codes of conduct. The Affective Events Theory(4) helps us understand how the culture or environment of the workplace might bring about a negative or a positive emotional response in the individual. I intend, here, to emphasize a participant-led delineation of “toxic work cultures”, while drawing attention to how individuals assimilate this external “toxicity” into their narratives.

Participants assessed work culture toxicity based on previous job experiences, ideas gleaned from social media, and from their peers – often seeing job experiences as toxic and exploitative only in hindsight. Most agreed that while “toxic” could be an overall “vibe”, it was a culmination of experiences over time that led them to label their workplace as toxic. As an example of toxicity in their work culture, one participant pointed to the design of the workspace that made for an isolating experience: people faced their computer screens toward the wall, and rarely had the chance to turn to look at each other, given their workloads; another spoke of how timers on the desktop made her feel ‘less human, more machine’. Yet others described organizations rife with workplace bullying, or people talking behind each other’s backs, or one team receiving monetary preference and credit for their work over others.

Some people also recounted having spent a significant amount of time struggling with distress before seeking support, which they did not receive. It is interesting to note the role power plays in perpetuating bullying. A few participants spoke of unethical leadership, and being humiliated by their bosses – including being subjected to remarks about their weight, or deteriorating mental health. There were also narratives of emotional manipulation through reminders about “how much they owed the organization”.

One participant used the term “enmeshment” for the toxicity in her workplace. “Enmeshment”, as a term derived from family systems theory, describes close-knit, entangled relationships that lack boundaries.(5) The participant talked of how interaction with colleagues in public-social spaces, long work hours, and the emphasis on an “informal” atmosphere (to diminish hierarchy) made it impossible for her to distinguish clearly between her work life and personal life and, consequently, her work self and personal self. This was echoed by another participant’s memory of how, at one point, her life was actually was just her work. Another participant spoke about how the work-life boundary was further diminished by her boss, who ensured employees worked seven days a week, and encouraged them to rent homes closer to the office.

Interestingly, participants’ responses to these various levels of enmeshment were not necessarily negative. Some spoke of going out of their way to volunteer, and doing different things in the organization because they were fresh from college and wanted to learn. One participant described a supportive, loving, friendly team and a non-corporate work atmosphere that contributed greatly towards helping her heal from the effects of a previous job’s toxic work environment. Several participants had gained significant insights into just what degree of convergence between the personal and the professional was likely to be harmful.

Participants referenced physical as well as mental health concerns. Some individuals, interestingly, talked about factors in other areas of their lives that made them feel as they did. For instance, one person spoke of how her lack of self-worth didn’t emerge only from a workplace that questioned her every move, but also from seeing her peers and friends reach (age-determined) milestones in their personal and professional lives. A constant replay of self-doubt was, however, very much part of most people’s experiences of toxic workplaces. One person recalled how what I refer to as the “knife of insight” came to her much later – it was only when she quit her toxic job and met people who had been through similar work experiences that she realized she had never been the “problem” she was made out to be. Another participant said that while he constantly second-guessed himself, he also knew that the industry he was in was going through a slump, and things going wrong could not be entirely his fault. Others spoke of supportive work teams, good friends outside work, hobbies, and their will not to give up as integral to their coping. Some even talked about how accessing therapy had equipped them with the tools to cope with their situations.

Although participants referred to time playing a role in their healing, the baggage of negative experiences still weighed heavy on their shoulders. Many mentioned their resolve to draw firmer boundaries between the personal and professional. While monetary expectations and clarity about their own roles helped some people deal with workplace toxicity, there were others who spoke of the constant struggle to remain authentic to themselves – with one participant pointing out how, with work that required emotional reflexivity, there was no way the personal and professional could neatly be placed in separate boxes.

Importantly, while participant narratives featured self-blame and shame, they also featured hope, resilience, even gratitude. Some participants were grateful for having the privilege of an escape route; others for insights into levels of negativity gained from previous work experiences; yet others for having good mentors, and friends who helped them cope.

Hope played a particularly significant role in participants’ recovery — while they did not expect any workplace to be ideal, they definitely hoped to find support through good colleagues, good mentors, and work that was aligned with worker rights and mental health.

These personal accounts of journeys of recovery from toxic workplaces bring to light the necessity of a mental health and wellbeing discourse at, and for, the workplace, and underline how crucial it is to view this within the ambit of workers’ rights.

“The culture of the workplace may include everything from its physical space to its work ethic, communication patterns, hierarchical structures, and written and unwritten codes of conduct.”

Author’s Note: The title of the article is taken from the Maggie Rogers song, ‘The Knife’, and is used here to highlight the struggles, learning, recovery, and resilience of the participants in the author’s study.

[4] Weiss, H. & Cropanzano, R. (1996). Affective Events Theory: A Theoretical Discussion of the Structure, Cause and Consequences of Affective Experiences at Work. Research in Organizational Behavior.