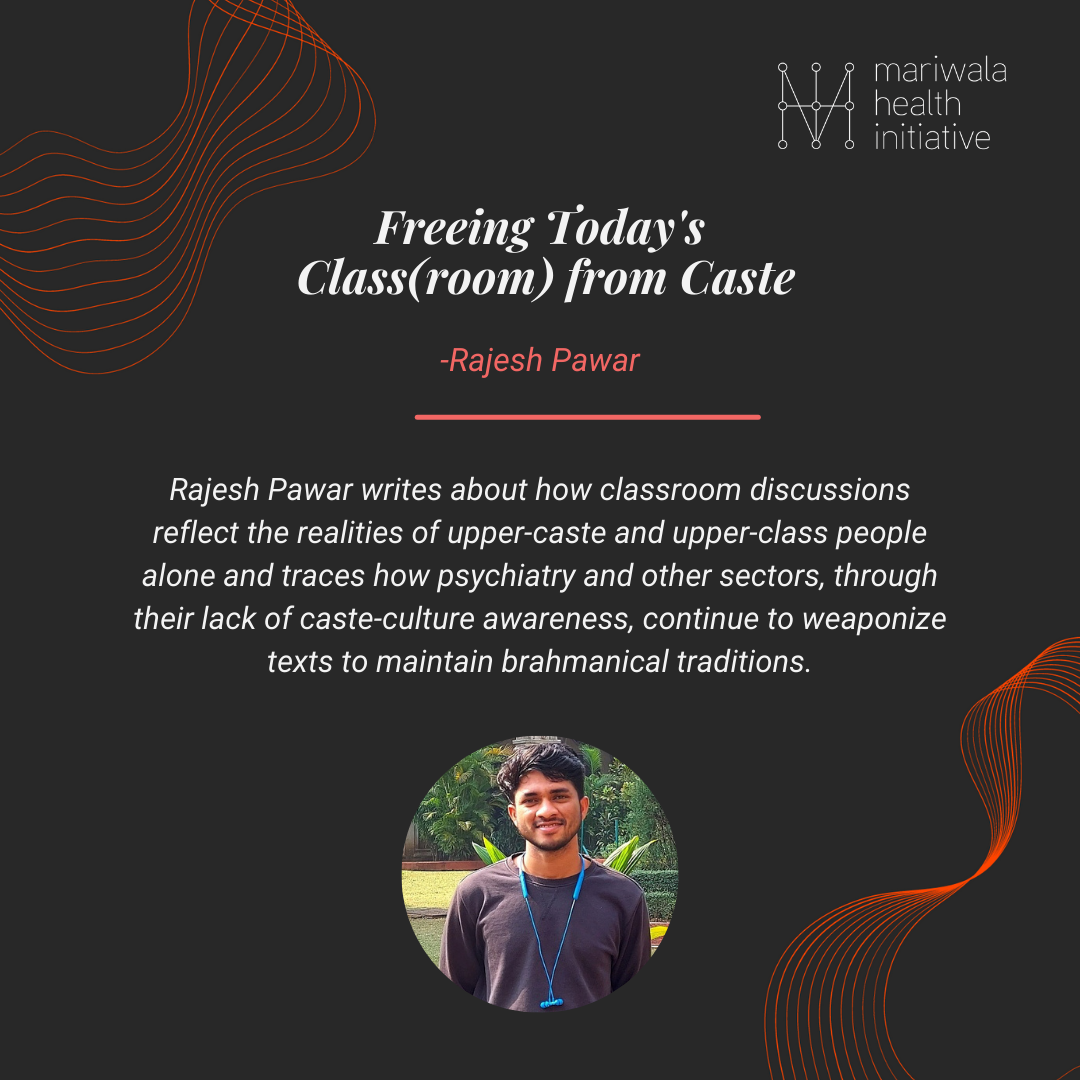 Rajesh Pawar is a postgraduate student of Clinical Psychology, Pune University. He is currently an intern at a mental health hospital. He is interested in studying mental health through social and cultural perspectives.
Lived Experiences

Looking at how caste hierarchies and norms in educational spaces affect mental health knowledge production, which must consciously reject the old oppressive frameworks in order to play an emancipatory role.

It is generally believed that educational institutes are a major site for the teaching, learning, and practice of liberal ideas and behaviour. These institutes are also symbols of pride, seen as places of knowledge production. Contrary to this spirit, however, is their other side, where they become spaces of injury to liberal ideas, rarely offer constitutional space for students – and plead ignorance or pretend innocence on both counts.

It was as a student that I realized how the whole structure of discussion in the classroom invariably favours the more privileged students. When many students and teachers drew upon certain common experiences with which some persons present were not familiar, the whole exercise would become one that reflected the realities of “upper” caste people alone. For example, when I was studying Psychology, the questions and discussions around happiness focused on upper caste activities and values like having dinner at a fancy hotel or, if someone wanted to describe their interests, they would use phrases like “foodie, moody” – reflecting an upper caste societal tendency to self-identify in consumerist terms. Besides this, programmes for mental health awareness at the university level were designed using role play situations for four or more students playing characters with upper class lifestyles, with situations and stories of other class or caste groups totally absent.

Despite it being common knowledge that the Indian subcontinent has multiple communities and identities, and that people from each have their own unique sets of experiences which they themselves know best, most contemporary intellectual frameworks remain confined to a narrow set of nearly exclusive values and stances, marked by a lack of honesty when it comes to acknowledging that most of us exist in cultures broadly defined by caste. Being unable to relate to the elite experiences and values that prevail in the classroom, students from “lower” caste cultures suffer from a divided sense of self. Fanon, who applied a colonial lens to psychoanalysis to discuss the impact of race and race relations on the unconscious minds of both black and white people, described such self-rejection as being accompanied by painful feelings of abandonment and of exclusion. His psychoanalytical explanations could well be used to explore caste as a historical and constant construct/ context in the minds of the Indian people. 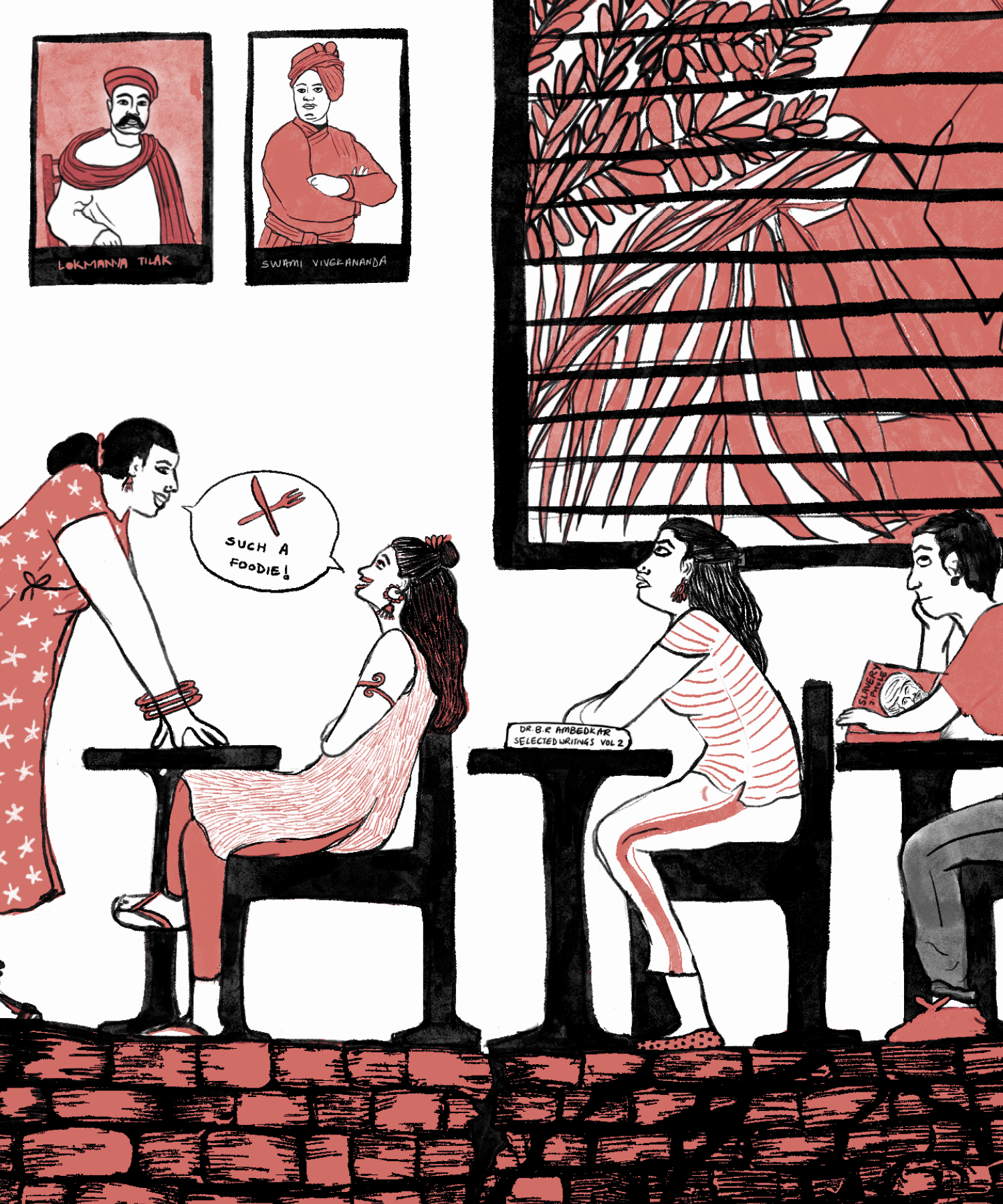 To be critical of an upper caste bias in Psychology education is to invite the “neutrality” justification, which claims that being neutral means being objective and scientific. Upper caste individuals who may identify closely with their caste locations often perceive themselves as living by exemplary moral standards; people in the classroom who experience some tension with their caste location and challenge dominant caste norms or strictures are often seen as deviant, as threats to the upper caste identity – and by extension, to authority, which then “deals” with the “deviance” to reduce the “threat”. As Foucault notes, an educational system is a political means of ‘maintaining or modifying the appropriation of discourse with the knowledge and powers it carries’.

There is little question that caste and class are still the major determinants of power in Indian society. The widely accepted Brahminical belief is that high caste individuals possess qualities related to wisdom, intelligence, honesty, austerity, and morality, while lower caste individuals are characterized by dullness, stupidity, immorality, impurity, and so on. Social reformer Jyotiba Phule argued that sacred texts were weapons for maintaining Brahminical traditions; and were considered as divine authorities, giving sanction to the varna system. Even today, educational institutes, through their lack of caste-culture awareness, continue to weaponize texts in the same manner. The process of producing knowledge without a critical consciousness of caste hierarchy – including within the educational institute – becomes an instrument of exploitation by creating a market of elitist myths about knowledge itself. The majority of educational institutes are, in this manner, complicit in the transmission of dominant ideologies in the classroom.

The field of psychiatry, too, is mainly in the hands of the dominant castes, and tends to label the psychic impact of oppressive experiences as the fault of individual over-sensitivity, or as irrational responses on their part, while neglecting the social hierarchies that create inequities through economic power relations and cause feelings of inferiority. Here the individual’s suffering becomes an “objective” point, placed outside of its caste-culture context.

Empathy could have been, and can be, key to the acknowledging of caste oppression. With identities better foregrounded in their knowledge systems, educational spaces could create more humanizing ideologies. Students might then have the opportunity to exchange experiences and beliefs across identity locations, in a situation where each one nurtures everyone. Rather than teaching how to “fix” others based on ignorance of their lived realities, psychology education could, in this way, become more inclusive and grounded.

Empathy cannot, however, be fostered and sustained without a philosophical framework based on freedom and equality. Unfortunately, empathy is often the first casualty of the competitive environment that the educational system encourages, further marginalizing already marginalized students.

Mental health may be seen as an elite discipline, because access to its services and resources remains available mainly to the upper caste population. The deeply rooted caste hierarchies in Indian society make for a rejection of the mental health issues of people from the lower castes by subjugating them and degrading their value as individuals. Their experiences remain absent from textbooks, which intensifies their overall rejection. Meanwhile the standards of “normality” set for personality and behaviour are derived from the realities of particular caste and class sections – and this cannot be seen as “innocent” knowledge production, especially considering how crucially it informs our perceptions of one another. Mental health frameworks exacerbate existing oppressions when they fail to apply principles of social justice while engaging with individuals.

Ultimately, if knowledge is to play an emancipatory and ethical role, it must eschew its brahminical discourse – and this is true of current mental health knowledge power as well. The idea of mental health must be revised to include the liberation of the individual from social ills, which may be seen as a collective political and reformative task.

Historically, Phule’s knowledge creation was in contrast to elitist theory and Brahminical traditions. He laid emphasis on knowledge as a tool for shudras and ati-shudras to stand forth and think on their own. For him, gaining a place in the existing discourse doesn’t come easily, but involves socio-political struggle. It is through such struggles that humans become active and responsible participants in gaining their self-identity.

(5) Omvedt, Gail. Understanding Caste: From Buddha to Ambedkar and Beyond. Orient Blackswan, 2011.

“The process of producing knowledge without a critical consciousness of caste hierarchy – including within the educational institute – becomes an instrument of exploitation by creating a market of elitist myths about knowledge itself.”