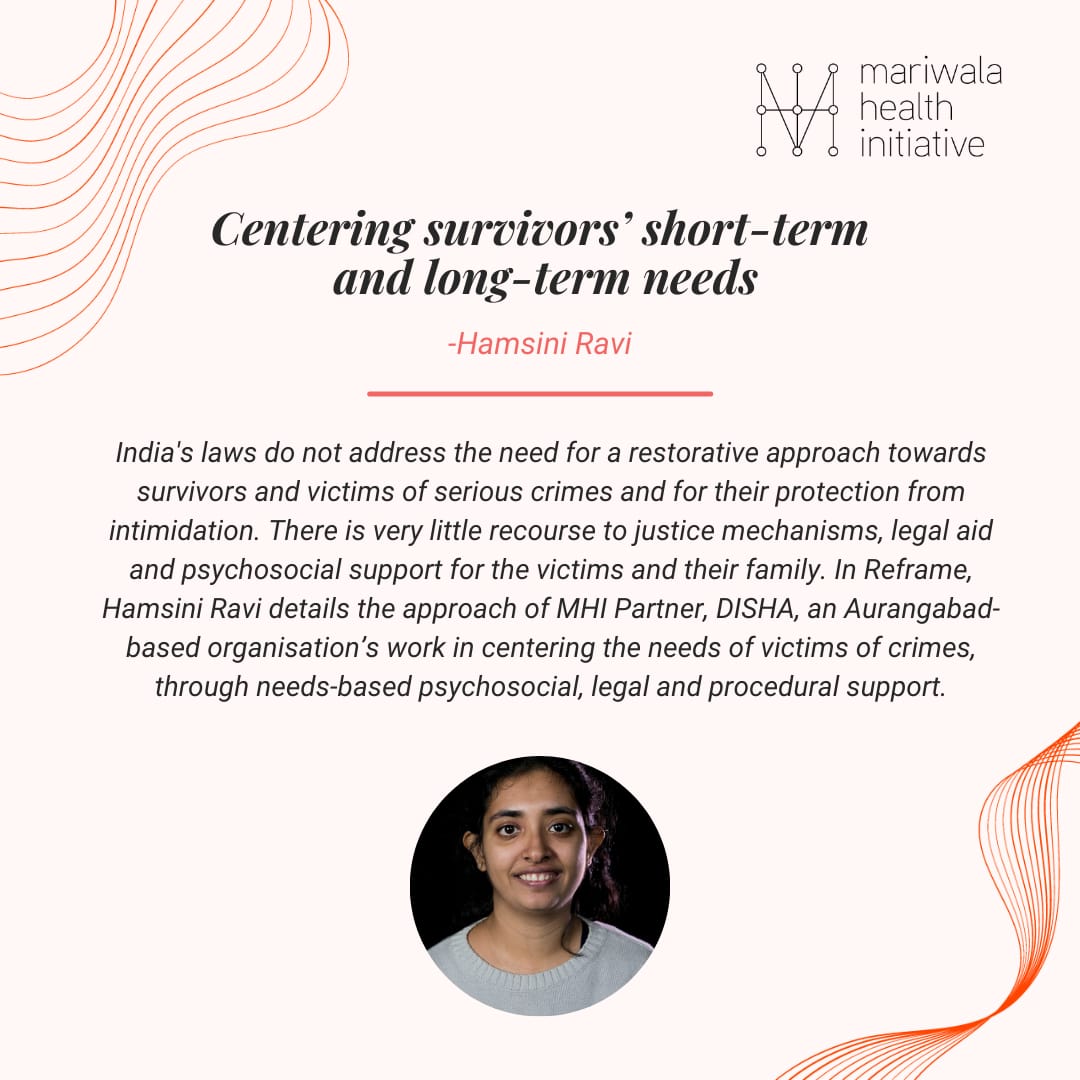 Hamsini Ravi is MHI’s Communications Manager, with nine years’ experience in communications and knowledge creation for the social sector. She has a Master’s in Development Studies from the University of Sussex, UK. Ha...
Service Delivery

Inside the Criminal Justice system: foregrounding survivors and victims of serious crimes.

It is well-documented in social science research that structural factors render people from marginalized groups vulnerable to serious crimes such as sexual violence and homicide. Gender-based violence is systemic and pervasive both in India and globally. Most hate crimes stem from the deliberate intention to malign and hurt individuals belonging to certain, usually marginalized, socio-economic groups. Besides being subjected to social exclusions and discrimination, those marginalized by their caste identities, in particular, or living in conflict zones, commonly experience rape, abuse by police and military personnel, land encroachments, and evictions.

Not only are marginalized groups extra vulnerable, their access to justice tends to be limited and is often obstructed. The National Crimes Records Bureau data for 2019 showed that conviction rates for perpetrators in offences under the SC-ST Atrocities Act were as low as 32% across the country. Survivors, as well as others affected, such as their immediate family and peer networks, tend to be traumatized and re-traumatized by a justice system that colludes with other institutions, such as the police and the medical establishment. Oppressive medico-legal practices in India include the now-banned “two-finger test”, where a doctor examines the  genitalia of the rape survivor to assess whether they were a virgin at the time of the rape. If prior sexual intercourse is confirmed, this is construed as evidence of “immoral behaviour” on the survivor’s part. Apart from the emotional and physical trauma they inflict, such procedures prohibit access to justice, often pushing the survivor into further peril.Caste is a significant marker for studying how the criminal justice system responds to survivors of serious crimes in India. The Vishaka Guidelines for preventing sexual harassment in the workplace were formed in the aftermath of a serious rape crime in 1992. Bhanwari Devi, from an OBC background,  was a community worker in the Women’s Development Programme implemented by Rajasthan state. Five men raped her because she was reporting instances of child marriage among families from dominant castes like theirs so that government officials could take preventive action. The perpetrators were acquitted by the District Court, with the judge stating that it was impossible in India for members of the same family to commit rape together, or that upper caste men could rape a lower caste woman.

Nearly three decades later, in September 2020, another horrific gang rape was committed in Hathras, Uttar Pradesh. The victim, a 19-year-old Dalit girl, was murdered, and her body was secretly cremated by the police without anyone from her family present. The police later claimed that the victim had not been raped at all; it was all a plot to defame the UP Government. The victim’s family have since had to face unpleasant court proceedings, with an advocate opining that the four accused, all related to one another, were innocent because ‘as per our culture, a man will not rape a woman if his relatives are around.’

Survivors of sexual violence bear the burden of proof of the crime. While women and other marginalized genders have limited access to survivor/victim rights, intersecting marginalizations may further constrain access to these rights. Meanwhile, the criminal justice system in India continues to be focused on punishment, and is known for its delayed convictions as well as for abetting structural forces that criminalize communities marginalized by caste and religion. The death penalty is not uncommon.

The law does not address the need for a respectful approach, protection from intimidation and access to justice mechanisms, legal aid and psychosocial support. While some laws detail the rights of the accused, there is no corresponding provision for survivors’ rights. The UN’s Declaration of Basic Principles of Justice for Crimes and Abuse in Power was adopted by India in 1986, but a comprehensive law directing the rights and rehabilitation of all survivors is yet to be drafted.

The criminal justice system in India, having already traumatized the survivor of the crime and those close to them, continues to fail them and invisibilizes their trauma without any kind of structural, financial, legal, or psychosocial aid. Civil society interventions have also tended to be overwhelmingly perpetrator-centric. While there are some important interventions, challenging the justice system’s disproportionate persecution of those from marginalized sections, they often fail to address the many difficulties faced by survivors: suffering caused by isolation; political and social pressures on family members to drop charges; the absence of necessary police protection.

Against this reality, DISHA (Developing Intervention for Social Human Action), an Amravati-based organization, centers the needs of survivors of serious crimes and their families. It works with survivors of serious crimes, ensuring psychosocial, legal and procedural support, including linkages to existing government schemes and entitlements, particularly for those from marginalized communities.

Since its inception in 2008, DISHA has followed a victim-centered approach, studying the rights and entitlements existing in other countries as well as conducting action research on the situation of survivors in Amravati district. Apart from psychosocial support to the survivor and their families, DISHA also provides specific need-based services such as helping with procuring medication and accessing healthcare, school and college admissions for victims’ and survivors’ children, and linking survivors to vocational training opportunities so that they are able to consider employment possibilities. By 2020, DISHA had supported 20,316 individuals in navigating their lives after a serious crime had been committed against them or someone close to them.

DISHA’s model involves foregrounding the individual’s social location, privileges and oppressions. The course of the intervention for each survivor/victim is charted accordingly. Survivors deal with multiple pressures after the crime occurs, including harsh legal proceedings – and social stigma, too, for being at the receiving end of certain crimes. Often, they and their families suffer economic and social repercussions such as disruptions in education or work, and the loss of social networks. Survivors from marginalized communities face greater stigma, both in the aftermath of the crime and in their pursuit of justice.

Home visits, a significant component of DISHA’s intervention mode, aid in understanding the victim’s background comprehensively. The organization also runs a dedicated helpline for those seeking information and support, and has integrated support desks in police stations across the district to strengthen the interface with victims at the police level, and provide onsite psychosocial and legal support. The police also refer victims and their families to DISHA.

Based on its years of work with survivors of serious crimes and their families, DISHA was successful in its advocacy with the state government, and used public interest litigation to have Maharashtra implement a Victim Compensation Scheme in 2014. The scheme provides a compensatory sum of Rs 2,00,000 to families of murder victims, and to survivors of acid attacks or other types of assault resulting in permanent disability.

DISHA’s unique and comprehensive model works with survivors of violence as well as with public systems such as the police and law, and with communities, to build an ecosystem that is responsive to the needs of survivors/victims, with an emphasis on serving marginalized communities. Its model taps into existing government schemes and provisions to leverage support, while using the findings from its work to advocate for structural reforms. The attempt is to ensure short-term psychosocial support for survivors/victims and their families, as well as long-term dignity and security.

(1)  “Survivors” – as a word implying more agency – is generally preferred over “victims” within contemporary discourse; however, DISHA has used “victims” through its literature – and the latter word may also refer, in this article, to victims of serious crime who do not survive.