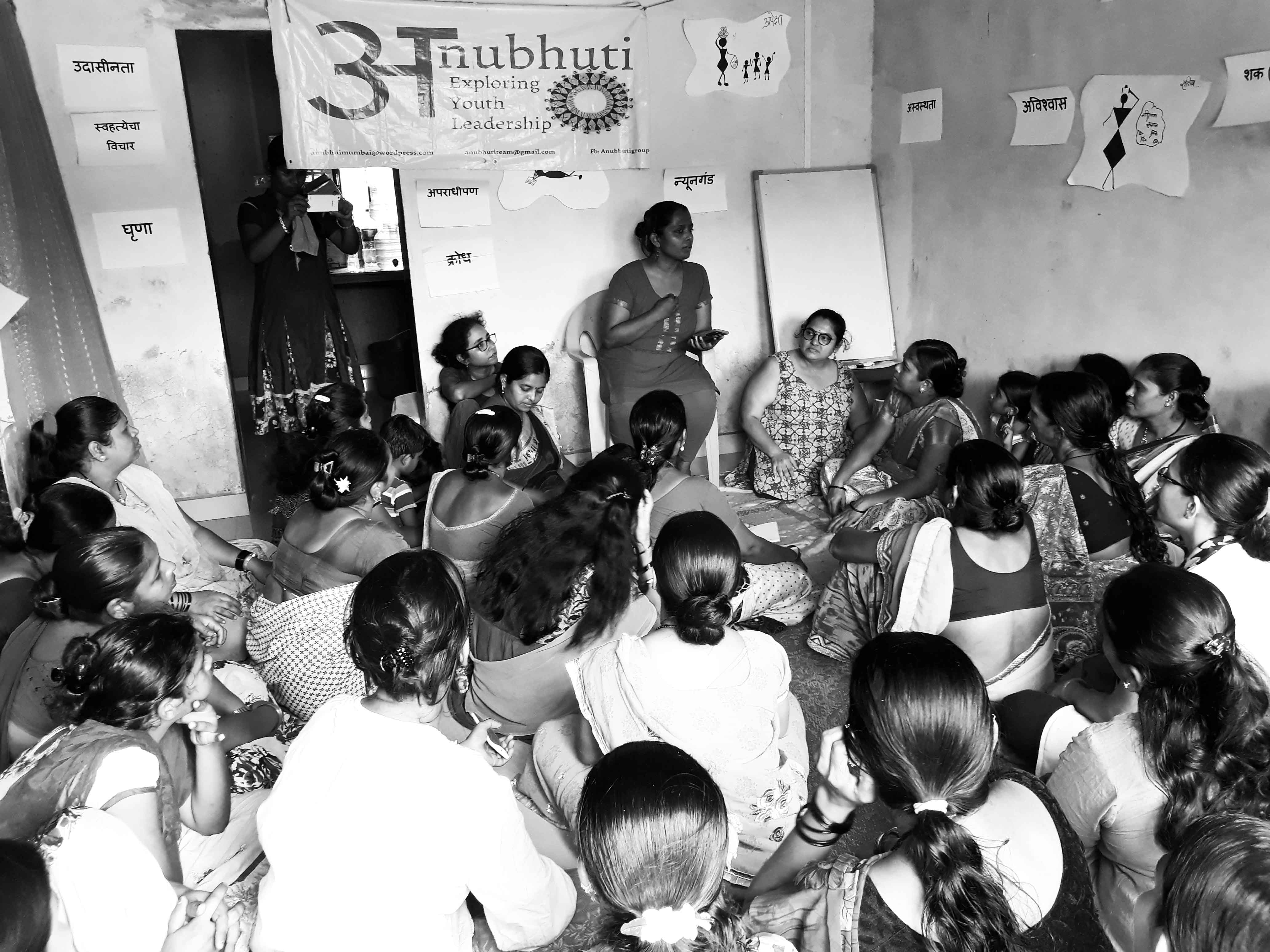 Anubhuti was founded by Deepa Pawar, who belongs to a historically oppressed community, after she had spent more than 16 years working on issues affecting marginalized communities. This registered organization is led entirely by young women, who share its vision of development with a focus on youth leadership and gender equity for vulnerable sections of urban as well as rural populations. Anubhuti has been working with resource-deprived communities in the districts of Mumbai and Thane, striving for larger societal change with the support of sensitized stakeholders, including  government agencies.

Mental health is a significant aspect of Anubhuti’s work: its Community Development Committees, comprising trained local youth, lead counseling and awareness drives, besides advocacy with the local and municipal government for development-related issues affecting their areas. The aim is to provide mental health services at the community level that are inclusive, accessible, non-discriminatory and sensitive towards gender, sexuality, ability, caste and class issues. Erasing much of the stigma that attaches to mental ill health has been an important achievement of Anubhuti’s interventions.

Project with MHI
Mental health interventions in Kalyan-Dombivali and Vile Parle
Because of the success of its mental health interventions in two communities, Anubhuti plans to expand its work in this area to include the semi-rural Kalyan-Dombivali locality in Thane district, and to the urban Vile Parle neighborhood in Mumbai city. The project has several components: inculcating in its Community Development Committee members a feminist understanding of mental health; reaching out to entire communities in order to de-stigmatize mental health concerns; reaching the most marginalized, including tribal settlements around the chosen locations; carrying out research, and creating IEC materials that are non-discriminatory and inclusive; working to sensitize local authorities.

Both neighbourhoods have a majority population of oppressed caste groups which, along with girls and women, religious minorities, and tribals, constitute the most marginalized sections in these areas. A large number are engaged in daily wage labour, and many young people drop out of higher education due to lack of resources. Substance abuse is widespread, as are physical disabilities, while mental illnesses are either unrecognized or stigmatized.
The project participants will, primarily, be local youth from marginalized backgrounds, along with health workers, local leaders, and persons from the relevant local government departments. The activities planned are training committee members in baseline counseling and referral; further training in leading community-based mental health interventions, and in advocacy for sensitive mental health services with authorities; setting up a counseling center within the community; awareness-raising programs on mental health; partnering with a like-minded mental health organization in the vicinity for further referrals; researching the status of mental health in the chosen locations, and using the data for advocacy with local leaders and government; creating and disseminating accessible and inclusive IEC materials, with a special focus on reaching the most marginalized groups; working with elected leaders and relevant government departments so that they understand and support mental health measures in their constituencies.

Most youth spend a major part of their time in education spaces, and alarmingly four of every ten students experience depression and one student dies by suicide every hour. Yet, Indian educational institutions are ill equipped to deal with students’ mental health issues. Anubhuti’s school-based Mental Health Justice program aims to make educational spaces better equipped to enhance mental well-being among youth and address psychosocial distress within the education system. This is especially pertinent among vulnerable communities that face mental distress due to multiple marginalizations including caste, gender and class. Anubhuti implements a rights-based, intersectional, feminist training module of mental health which is sensitive to socio-political backgrounds of the student-clients and which trains school teachers to implement a school-based counselling program for their students. Anubhuti also implements activities, such as ‘Mann Melas: Mental Health Fairs’, designed to encourage help-seeking behaviours in students, their parents and the communities they live in. The school counselling program includes a resource directory and referral networks with mental health services.