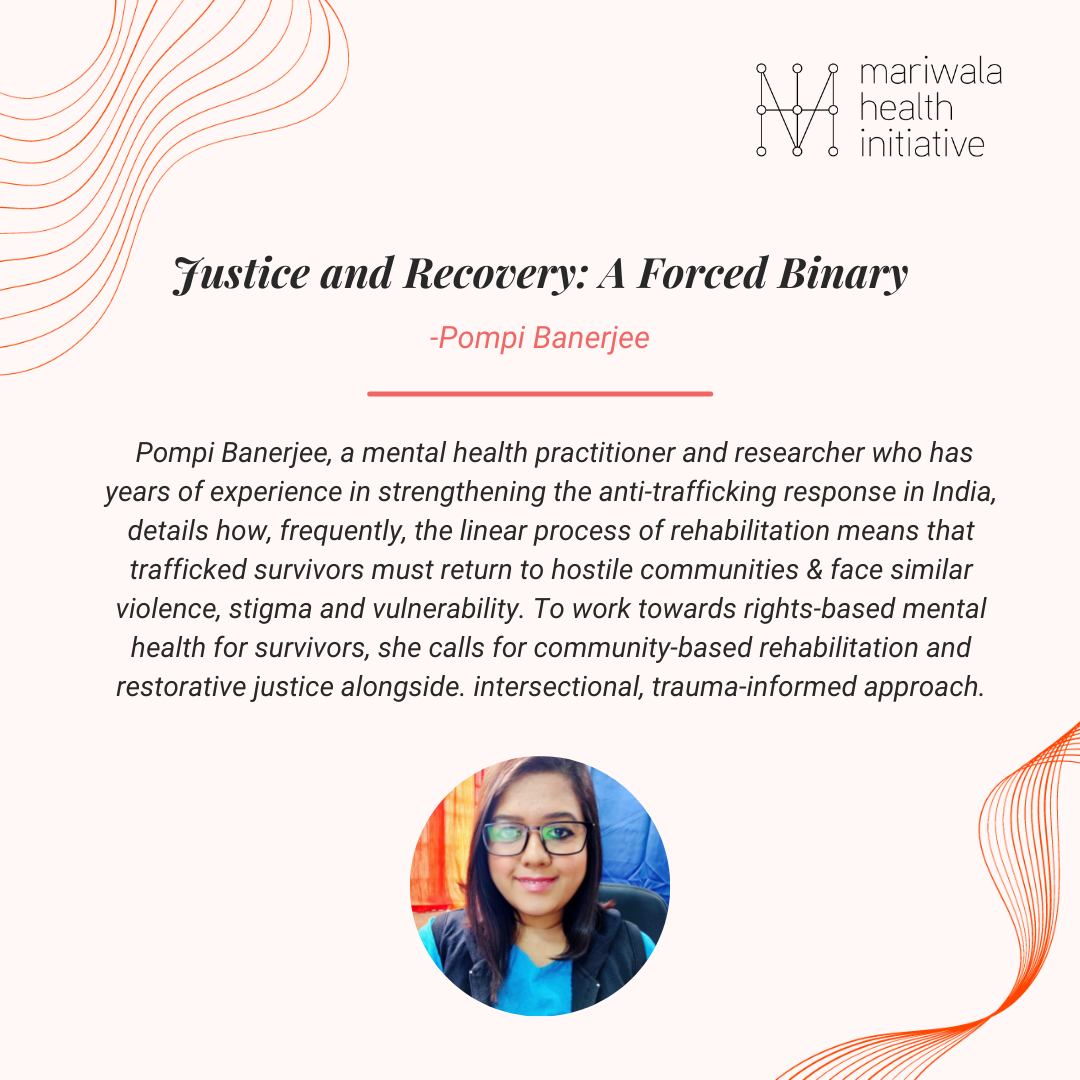 Justice and Recovery: A Forced Binary

responses to victims of human trafficking

Narratives of survivors consistently show how trafficking is neither a single episode of violence, nor the only form of repeated violence that survivors endure. Kidnapping, abduction, rape, confinement, physical torture, blackmail, threats, and grooming – more than one of these violations tend to be involved, causing poly-victimization. However, the current socio-legal framework in the anti-trafficking ecosystem fails to focus on the impact of poly-victimization on survivors’ mental health.

Trauma reported by survivors does not consist only of their direct experiences of exploitation by traffickers, but often includes the deprivations and causes that led to their entrapment by the latter, as well as the treatment they undergo at the hands of both, the criminal justice system, and the social welfare agencies that “rescue” them. A system that seeks to ensure justice for survivors must address these multiple aspects. However, a custodial approach to the rehabilitation and protection of survivors of sex trafficking, and the focus on criminalizing traffickers – without adequately defining and protecting the rights of survivors, or making service providers and policy implementers accountable – results in a skewed approach, and a disabling environment for survivors to recover from trauma. While poorly functioning welfare agencies take over survivors and their rehabilitation, the law courts combine with custodial shelters and poor, non-accountable counselling services to inflict secondary trauma.

the mental health status of survivors

In 2014, ‘Bringing It All Back Home’, a study on the assimilation of survivors into their home communities, showed that barely 3% of the respondents accessed government support services for their rehabilitation. The study also shed light on a possible reason – the debilitating impact of trauma on their mental health. 87.3% reported symptoms of dysthymia (persistent depressive disorder), while 13% were experiencing major depression. These are alarming figures, especially when compared with the prevalence rate of 1.8% depression and dysthymia for women in the general population. The study hypothesized that the lack of PTSD (Post Traumatic Stress Disorder) assessment and its treatment, not mandated by the law or practised by welfare agencies, results in the condition’s remaining unaddressed.

Following the 2014 study, Sanjog, a mental health rights organization, tracked the mental health and wellbeing status of 100 survivors from West Bengal, between 2014 and 2020, while providing them with psychosocial services. This intervention responded to survivor priorities by strengthening access to psychiatric and psychological services in state-run hospitals; through training and supervising a cadre of grassroots social workers in the delivery of trauma-informed restorative care; and mobilizing survivors to form support groups. During a reassessment in 2018, 62% of the respondents reported a reduction in the severity of depression, anxiety and/or PTSD. For the next six months, the intervention was modified to ensure that the 38% who were still experiencing severe symptoms received psychiatric treatment and counselling or therapy from private clinics. 60% of this latter group reported improved mental health.

In 2019, a study on community-based rehabilitation interventions run by NGOs across 10 states of India for survivors of human trafficking and survivors of sexual and domestic violence showed that trauma-informed mental healthcare remains one of the key challenges faced in all of these programmes, due to the prevailing lack of focused policy, and a lack of resources.

marginalization of communities: Demographic profiles of survivors of trafficking indicate that 80-90% belong to backward castes, and to religious, political and economic minority groups; and have, typically, faced at least one of these situations – child marriage, domestic violence, income insecurity, caste-based violence, forced migration or displacement, gender-based violence. Such experiences of violence are further exacerbated by their lack of access to recovery services, or other opportunities to mitigate or minimize the impact on their overall wellbeing.

There is a dearth of community-focused interventions to prevent violence: While the central and state governments have created welfare schemes for poverty alleviation and economic inclusion, coverage of rural areas is inadequate. Incidents of violence are largely handled using the lens of criminalization. Relying only on punishment for individual perpetrators is, however, ineffective in the absence of a framework that addresses the developmental roots of violence.

Undefined rehabilitation: Presently, India does not have a definition of rehabilitation for trafficked survivors. The dominant notion of rehabilitation – that of restoring the victim to their former state of assumed wellbeing (their life as it was prior to the crime taking place) – ignores the fact that experiences of poly-victimization cannot be undone by any measure of the law and policy; also, the assumption of prior wellbeing is deeply flawed. Even a cursory study of the demographic details of victims would reveal that they were rarely “well” – physically, psychologically, socially, economically, or politically.

reintegration without addressing vulnerabilities: Current rehabilitation processes follow a linear trajectory,  beginning with rescue, and then institutional care, followed by reintegration. The Freedom Communities study clearly showed that the government systems act only as service providers, rather than as active participants in community-based rehabilitation processes. The trafficked survivors are returned to communities that are now hostile, and that stigmatize them, while the preexisting conditions of violence and vulnerability continue to exist. The added threat of intimidation by their perpetrators further oppresses many survivors.

In the case of labour trafficking survivors without access to welfare services, the vicious cycle of servitude often restarts after reintegration. Consequently, they fall back into the debt traps of contractors and traffickers, in order to sustain self and family.

It is important to note that none of these provisions include focused interventions either at the individual or group level for complex PTSD, or for the assessment of survivors; mental health. Redressal mechanisms for violence and stigma faced by survivors within their communities are also missing.

While a legal framework delineating the government’s responsibilities towards survivors of trafficking does exist, it fails to be implemented, because managing and driving Community-based rehabilitation (CBR) programmes demand a commitment that appears to be absent: CBR requires clear planning and protocols, provision of resources, decentralization, referrals and, finally, monitoring and evaluation.

For such justice to be possible, mental health needs to be recognized and acknowledged as an intersectional issue, and not a medical issue alone. To address the invisibility of mental health as a core component, justice must be redefined to include restorative justice, and not be limited to retributive criminal justice. Significant investment is required to be made by government and non-government stakeholders into building intersectional interventions to address the impact of violence on the mental health of survivors – by foregrounding survivors’ own voices.