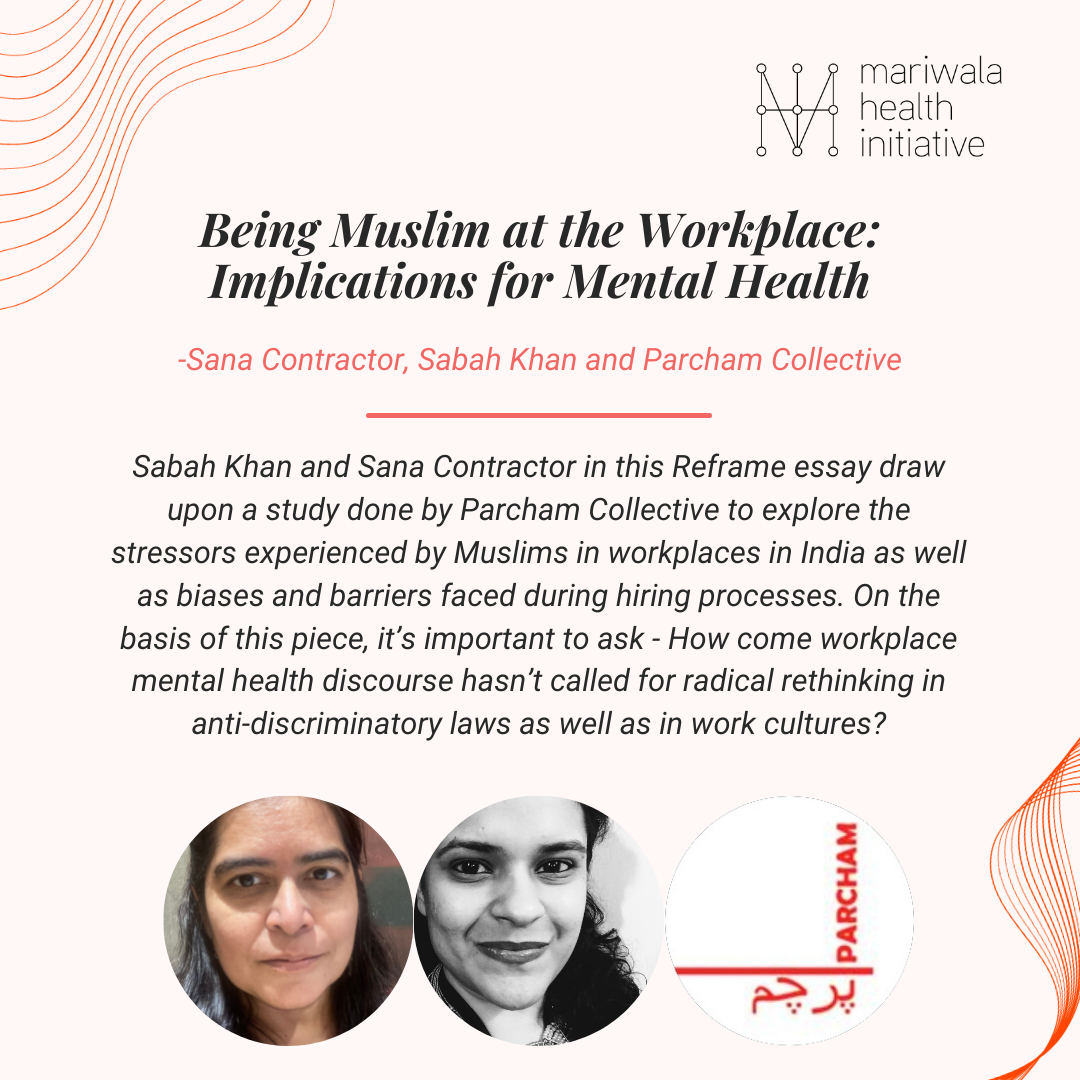 Sana Contractor is an independent public health professional working on issues of social exclusion, violence, and health. Sabah Khan is a feminist activist working on minority rights, and co-founder of Parcham Coll...
Research

Being Muslim at the Workplace: Implications for Mental Health

The structural violence that Indian Muslims experience, as a significant area of inquiry.

A holistic approach towards health and well-being situates the latter not just in individual circumstances, but also in structural factors that are often overlooked.

Muslim citizens in India have been living in an atmosphere filled with both acts and threats of outright violence against them, one in which they are continually vilified, and are being threatened with loss of their citizenship. Meanwhile, historic oppression contributes its own unique stressors in the form of economic, employment, and health-related difficulties. The relationship between mental health, employment, and religion-based discrimination is complex and dynamic: while unemployment and labour insecurity are mental health concerns, workplace harassment can cause employees severe mental distress.

In 2019-20, Parcham conducted a qualitative study based on 10 in-depth interviews with Muslim youth in two large metros, Mumbai and Delhi, to understand how participants experienced the formal workplace. We draw here on this study, and on our experiences of working with Muslim youth in Mumbra (Thane district, Maharashtra).

As per the Sachar Committee Report (2006), a mere 3.4% of Muslims were graduates; less than 8% of Muslim workers in urban areas were employed in the formal sector as compared to the national average of 21%; only about 27% of Muslim workers in urban areas had regular work.  As per the report, the low representation of Muslims and the perception of discrimination in securing salaried jobs make them attach less importance to formal ‘secular’ education in comparison to other groups. The Post-Sachar Evaluation Committee Report (2014) found that a high proportion of educated urban Muslim youth reported being unemployed, tracing differences in the rates (between Muslims and other groups) to social and economic discrimination.

Our own work with Muslim youth in Mumbra reveals a sense of disillusionment, and distrust of the state and of the “other” who will discriminate. Respondents pointed out that hiring is extremely nepotistic. First generation graduates, whose families had no connections in the formal sector, uploaded their resumes on job placement sites and appeared for multiple interviews in vain. Interviews were marked by some form of discrimination, overt or subtle – such as stigma against hijabis, who were asked to let go of the hijab. Interviewers who were Muslim themselves perhaps did not want to seem “regressive” by hiring a woman in hijab.

One person recounted being hired because her name was “ambiguous”, only to learn on joining that the firm did not hire Muslims. Our respondents were usually the first and only Muslim employees in their workplaces. One respondent, who also represented the Association of Muslim Professionals, validated this experience – at the job fairs they conducted, they observed that companies were comfortable hiring Muslims or Dalits at lower positions, but not at managerial or higher positions. 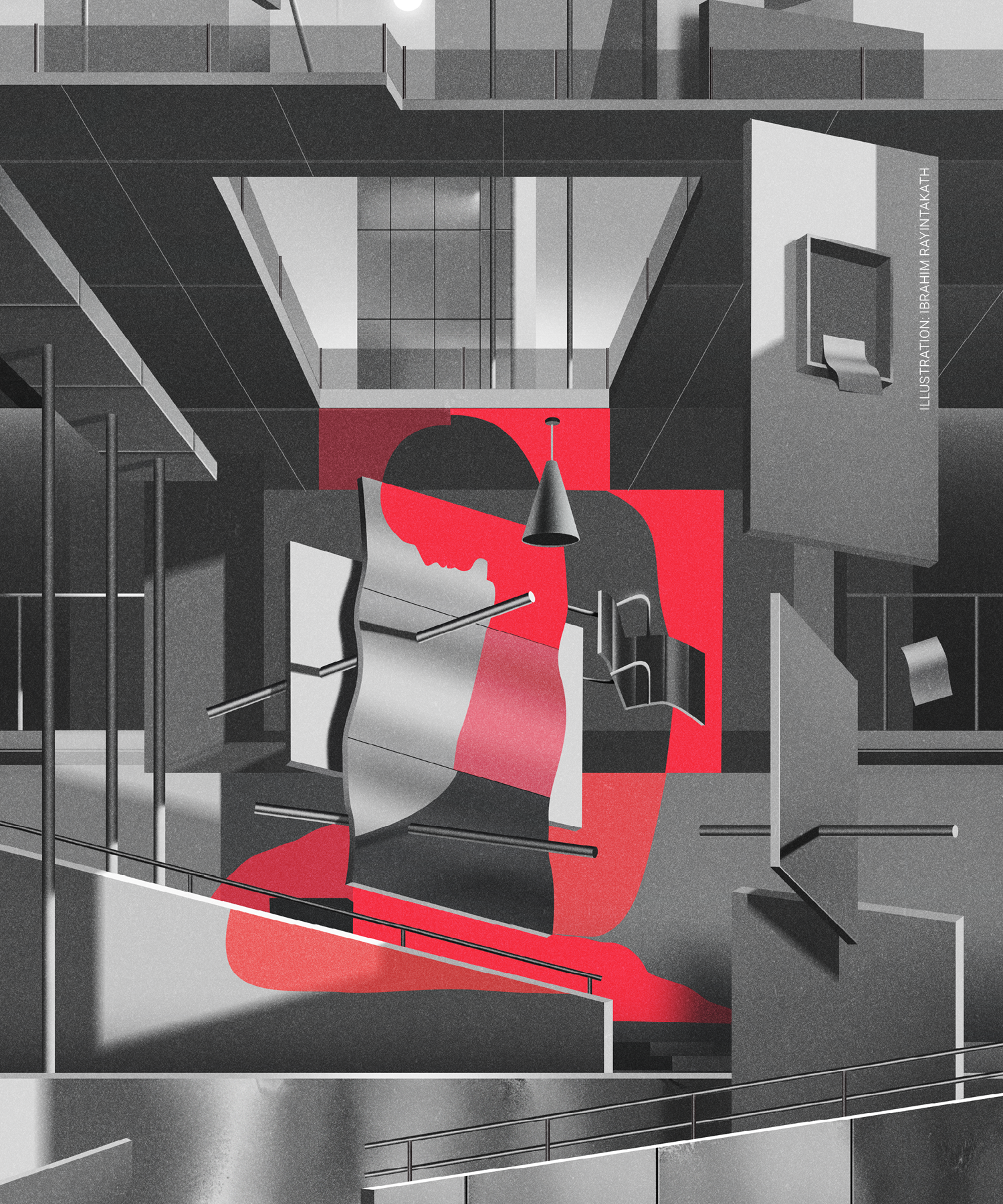 bias and discrimination at work

Workplaces function within the larger, entrenched political and social structures, which thus shape the workplace experiences of people from different social locations. Respondents narrated incidents that made them feel othered – and although only 2 of the 10 described these as “discrimination”, all agreed that as Muslims, they had to be extra careful, work harder, and challenge stereotypes. The burden of “making a good impression” was always present.  Shorter working days during Ramzan, or being given time out for Friday prayers were, for most, “privileges” not to be “misused”.  One individual related what was said when a Muslim colleague disappeared with the office laptop: ‘If a person leaves with a laptop and disappears for two weeks, people [talk of] “who (name), where… (locality), which community”… the next Muslim who comes in has to work ten times harder to change that stereotype.’

People also spoke of how some (stated and unstated) office policies other Muslim employees, such as not recognizing Eid as a holiday, stigma around food, and so on.

Political discussions in workplaces often caused great discomfort, as these painted Muslims as Pakistanis, terrorists, troublemakers. When Ajmal Kasab was to be hanged, a colleague mocked a respondent, saying, ‘You must be very sad today,’ – as if, as a Muslim, she must be a sympathizer. Another respondent was sent a WhatsApp forward blaming Muslims for the spread of COVID-19, during the Islamophobic coverage of the Tablighi Jamaat meeting in Delhi.

Our respondents reported feelings of anger, humiliation, dejection, as well as physical illness, as reactions to workplace discrimination. One person spoke of how, when a co-worker asked her to explain the actions of Tablighi Jamaat, she retorted, ‘Am I their spokesperson? How should I know?’ Most however, preferred avoiding confrontation, and tried not to “wear your religion on your sleeve.” To avoid triggering conversations around election results, a respondent took the day off. Another felt so humiliated about having to keep watching what she ate that she quit the job.

Implicit in the study was the immense fear that Muslim youth live with. While recruiting participants for the study, oftentimes they would initially indicate a willingness to participate, but later express reluctance, and withdraw. What does it mean to live with this fear of the very real consequences that might follow an honest articulation of the “Muslim experience”?

These insights are revealing, but far from exhaustive. Our sample, which comprised mainly urban, English-speaking, upper caste Muslims, does not represent the experience of Muslims marginalized by caste and class, or those working in the informal sector with its gross financial insecurity, lack of protections, long hours, and immense tedium.

Anti-discrimination laws that provide an avenue for raising grievances are clearly needed. However, given the reluctance to speak freely that we sensed among our study participants, and fear of backlash, or of jeopardizing future career prospects, such laws would not suffice to address structural workplace harassment. Clear positions taken by management upholding a culture of diversity and inclusion could comfort “othered” employees. The experience of Idris (name changed) is a case in point: one Friday, Idris came to his new workplace dressed in kurta-pyjama and topi. A co-worker’s comment on his attire pushed Idris to wear formals the following Friday. His seniors noticed, and on learning of the reasons for the change of outfit, reassured him that they had no problem with what he might wear. Such gestures help employees feel at ease, and reduce stress.

A systemic shift in work culture is indicated, rather than legal remedies alone.

We began this study to try and unpack what “religious discrimination” might mean at the workplace. While not specifically considering mental health, we did gain insights into the complex pathways along which the relationship between employment, religious discrimination, and mental health could be explored. The site of necessary action must be wider than just the workplace. Several questions arise: What kind of pressures does a first-generation learner from a marginalized community face? What kinds of investments have they made, and how does not finding employment impact mental health? What does it mean to face multiple rejections owing to your name or your address? What does it mean to self-censor your opinions and suppress a part of your identity when you do get a job?

If a preventive approach is to be adopted, mental health advocates must address the root causes of the alienation and insecurity that Muslims face in various sectors, including employment.

(1) This article is based on the report 'Being a Muslim at the Workplace' by Parcham Collective, a feminist collective working towards the vision of a just and equal society respectful of diversity, celebrating difference and interdependence. Parcham Collective. 2020, Being Muslim at the Workplace, www.parchamcollective.org/being-muslim-at-the-workplace.

(2) Government of India, 2006, Social, Economic and Educational Status of the Muslim Community in India, www.minorityaffairs.gov.in/sites/default/files/sachar_comm.pdf.